I struggle to make sence of the following:

57.22 Questioner: What should that proportion be?

Ra: I am Ra. This proportion should be the 1.16 which you may observe.

57.23 Questioner: Do you mean that the sum of the four base sides should be 1.16 of the height of the pyramid?

I am working on a project based on pyramids, but I am not so good in math. Is there anyone that can shed some light on how this proportion could be translated into a slant (slope) angle?
On another website I read that the angle would translate to a slope angle of 81.72 degrees, I cannot get to the same results, so I hope that someone better with math could explain this a bit further. Any help would be much appreciated. My own results come to a 73.83° slope angle… so I believe I’m doing something wrong.

Here is a nice article (german) about it.

This should be an angle of 51.854 degree for the sides. (calculator) 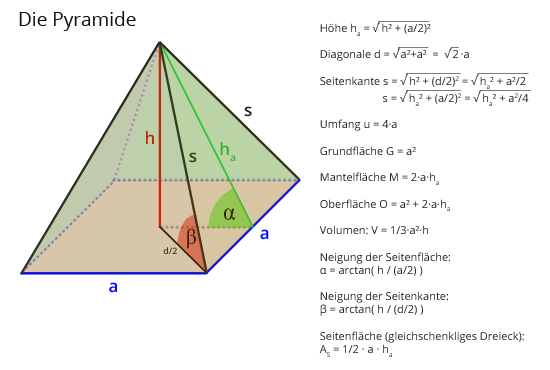 Another theory is that the pyramid was built with the width-height ratio of 440 / 280 royal cubits. This can be reduced to 11 / 7.

Thanks! I’m looking for more info however about specifically ‘the sum of the four base to be 1.16 of the height’. The mathematical 51.854 degree is for the Great Pyramid (51.827 according to Phi). The 1.16 ratio would be a very steep angle… much like the Nubian or Russian Pyramid… Is that 81.72? I cannot get the same results.

The nubian pyramids seems to differ between 68 to 72 degrees.

The Geometry of a Nubian pyramid - Graham Hancock Official Website

Do the dimensions of a pyramid affect Pyramid Energy? Learn more about the differences between the Nubian, Russian, and Giza pyramids.

If Ra meant 1.6, it would make a lot of sence, as Phi is 1.618 and that corresponds with the slant angle of the great pyramid, but they were not talking about the great pyramid in this specific session. That’s what confuses me.

At least Don asks for this value and maybe Ra did not “listen” correct.

I do not believe that, but it is possible ^^

The slant angle of the russian pyramid (76.345) is also mentioned in the Ra material… But this 1.16 ratio is rare and very specific to this Session, I do not believe this is an error… I would like to see what slant angle this would give =) Do you or anyone know if that is 81.72? I can not get the same results

the four base sides should be 1.16 of the height of the pyramid

That would result into 59.88 degree. Not so spiky like the nubian pyramids.

Thanks! Very spiky isn’t it?!

That’s why I find this so interesting…

Thanks for your thoughts, very much appreciated!

According to Precision Pyramids: If is the height of the pyramid is 1, then the sum of the four base sides is 1.16, which translates to a slope angle of 81.72 degrees.

At least I think the goal is to reach the golden ratio.

It seems I was overcomplicating things, if we literally use that 1.16 ratio the 81.75° aprox angle is indeed the outcome… Just like Precision Pyramids mentions. So spiky, strange…